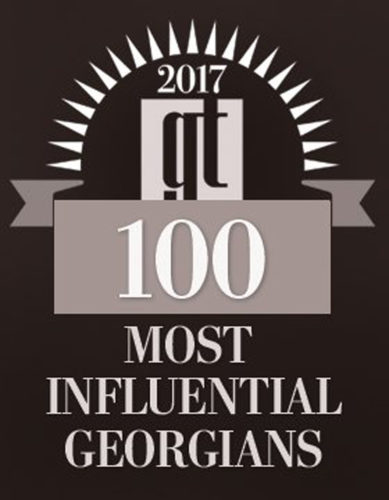 If leadership is influence, as the author John C. Maxwell says, then we not only have a list of the 100 Most Influential Georgians, but a representation of the strength of leadership in our state. For this, our 19th list, we have included many of the usual suspects – politicians, CEOs, college presidents – but we’ve also added a number of new names and faces to the list. All are people who inspire, exasperate, lead – and influence us.

Some work behind the scenes and some are recognized in every corner of the Peach State. But they have one thing in common: Each of the 100 people you’ll find on the following pages have an enormous impact on the daily lives of Georgians.

We at Georgia Trend do not take the task of selecting the most influential people in the state lightly. It’s a year-round process that involves lots of meetings and discussions. The original list is always more than 100, and we think the final group – subject to retirements, course corrections and shifts in power, not to mention late-in-the-year hirings and firings and a controversy or two – represents the realities of leadership, power and influence in Georgia.

You’ll also find a list of Notable Georgians on page 52 – people who are making an impact in the state or have made an impression on the Georgia Trend staff this year.

Armstrong is serving his second term, overseeing the organization responsible for planning and governmental coordination for the 10-county Atlanta region. He is also director and past chair of the Gwinnett County Chamber of Commerce and is a director of the Greater North Fulton Chamber of Commerce, where his stewardship fosters the sustainability of Atlanta’s ever-sprawling northern arc. – CD