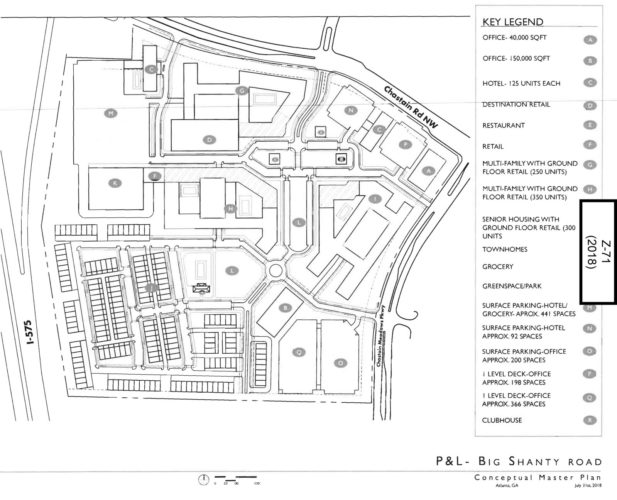 This site plan filed with the county shows developer Pope & Land’s design for a mixed-use development on Chastain Road just east of I-575.

A developer has filed plans for a 61-acre mixed-use development on Chastain Road just east of Interstate 575 that includes apartments, town homes, two hotels and nearly 400,000 square feet of office and retail space.

Pope & Land Enterprises has filed a request with the county to rezone the property, bordered by the I-575 off-ramp on the west and Chastain Meadows Parkway on the east, to allow for the development.

The rezoning request is scheduled to come up at November’s zoning hearings, according to county documents.

Pope & Land wants to be ready to start construction in the first quarter of 2019, though that could be delayed to a mid-year start, according to Mason Zimmerman, senior managing development partner for development & investment services at Pope & Land.

“We are trying to develop a walkable, mixed use project for Town Center with a reasonable density that is consistent with existing land use plans and appropriate for a site of this magnitude,” Zimmerman said. “Such developments are in other parts of the metro (Atlanta) area but are not currently in Town Center to this extent.”

Zimmerman said that there is an adjoining 40 acres of land that would be used for a second phase of the development.

The property, which is just outside the borders of the Town Center CID, is mostly undeveloped aside from a single-family home, according to documents filed with the county.

The development is expected to include a 52,000-square-foot grocery store, two hotels with 125 rooms each and a 68,500-square foot “destination” retail/restaurant building, according to documents filed with the county.

On the residential side, the development’s plans call for 160 town homes, a 300-unit senior living building and two apartment buildings — one with 250 units and another with 350 units — with a total 70,000 square feet of retail space on their ground floors.

“We think it’s a great location with close and easy access to KSU, the interstates (and) the new managed lane access point, and the site can easily be connected to the Noonday Creek Trail system,” Zimmerman said. “The location is dynamic in that it is close to existing neighborhoods and it is also close to existing retail and office, so this type of development is a natural next step to connect the area and the submarket.”