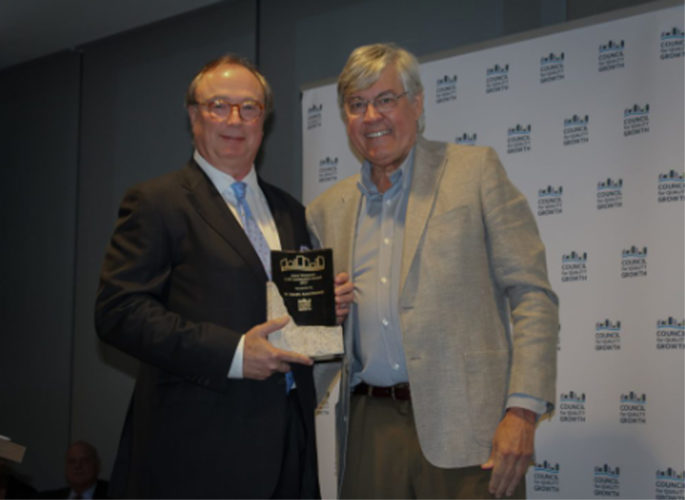 The evening was highlighted by updates on progress and projects from several CID’s, including Aerotropolis CID, Cumberland CID, Gateway 85, North Fulton CID, Perimeter CID, and Town Center CID. Over 25 CIDs were represented at the event last night, with participation from Executive Directors and Board Members alike.

Tracey Rathbone of Town Center CID remarked, “Kerry, we thank you for the leadership you given to us all. I don’t think you fully know what an impact you’ve had on all of us here tonight.”

The CID Recognition Reception, put on by the Council for Quality Growth, is the only event of the year that spotlights and honors the work that the Metro Atlanta CIDs do in our communities.

“CIDs provide a crucial element to the development of the Metro Area. Our CIDs here have become the national example of how successful CIDs are run and they deserve recognition for the work they do in our communities,” said Council for Quality Growth President & CEO, Michael Paris.

Warm remarks about the honoree were made by all program speakers, and the 2017 John Williams CID Award honoree, Tad Leithead made the presentation to the new honoree as an act of “passing the torch”. Both Leithead and Armstrong remarked on their late mentor, John Williams, namesake of the award, who passed away unexpectedly earlier this year and was instrumental in the foundation of establishing CID’s in the metro area.

In Armstrong’s speech he thanked all in attendance for the honor and noted that being included with the four other names associated with the award (namesake, John Williams, and previous honorees Senator Isakson, Governor Barnes, and Leithead) is a great honor saying, “The notion that my name might be added to any list which begins with theirs is a little daunting, very humbling, and truly, deeply meaningful to me.”

Armstrong also noted that his view of the future of CIDs is a positive one. “… I have never been more optimistic about our future than I am now. Because everywhere I look, in all the key places, there are really good people… working together to build our future,” concluded Armstrong.

Armstrong is the managing director of real estate firm Pope and Land and is actively involved in numerous civic, educational, and charitable organizations.  He is currently Chairman of the Board of The Atlanta Regional Commission (ARC), the official planning agency for the 10-county metropolitan Atlanta region.  He is the Chairman of The North Fulton Community Improvement District, a Director of the Greater North Fulton Chamber of Commerce, an Executive Committee member of the Metro Atlanta Chamber’s IoT.ATL initiative, and a member The State of Georgia Public-Private Partnerships Guidelines Committee.  He serves as a Director and Past Chairman (2009) of The Gwinnett Chamber of Commerce, Director and Past Chairman (2003) of The Council for Quality Growth. Armstrong also serves on the Boards of The Gwinnett Medical Center Foundation, The ATO Foundation and The Richmond Property Group.

Additionally, Armstrong has received numerous accolades for his community service efforts, including a Public Service Award from The Gwinnett Chamber of Commerce in 2006, and he was named Citizen of the Year by The Greater North Fulton Chamber of Commerce for 2008.  In 2013, he received the Georgia Department of Transportation Leadership Award.  He has been recognized by Georgia Trend Magazine as one of the 100 Most Influential Georgians.