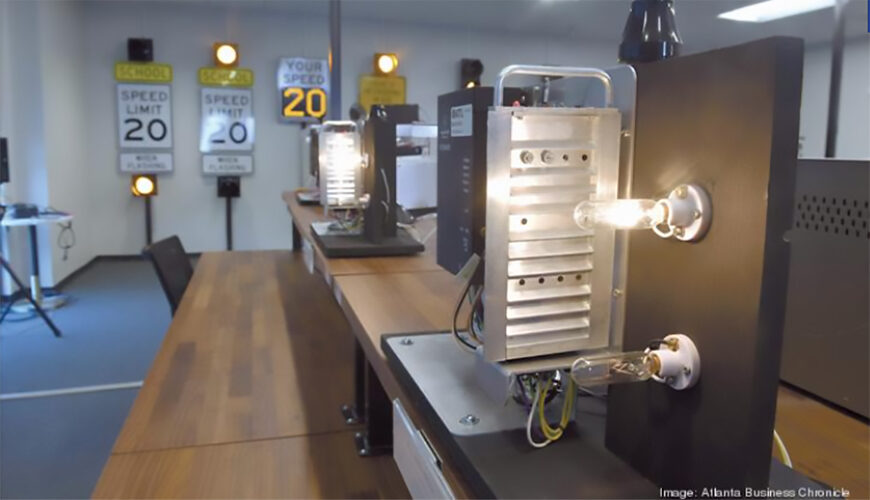 Infrastructure-Automotive Technology Laboratory (iATL), based in Alpharetta, claims to be the first facility in the world where automakers and transportation infrastructure manufacturers can create and test technology and applications for connected vehicles to communicate with traffic signals and other smart roadside traffic control equipment.

Imagine your car receiving an alert that a traffic light is about to turn red, or while at a stoplight, getting a countdown to when it turns green. Or while walking or cycling across an intersection, getting an alert that a vehicle is approaching. First responders can ensure green lights along emergency vehicle routes.

North Fulton County is the international destination for developers testing technology and applications for connected vehicles, thanks to deployment of equipment that allows cars and traffic signals to “talk” to each other, pedestrians, cyclists and other nearby infrastructure.

“It’s the first full scale deployment of this kind of technology in the world,” said Kerry Armstrong, who serves as chairman of both the North Fulton Community Improvement District and the Atlanta Regional Commission.

Alpharetta-based Applied Information Inc., which makes connected, intelligent transportation system software, provided the traffic signal preemption technology for first responders to the city of Alpharetta and throughout the North Fulton CID, which encompasses Alpharetta as well as parts of Milton and Roswell. So far, Alpharetta is the only municipality in North Fulton to fully deploy the technology within its borders.

Applied Information also created the 4,400-square-foot Infrastructure-Automotive Technology Laboratory — or iATL — which develops and tests technology and applications for connected vehicles. Company President Bryan Mulligan says it is the first of its kind in the world. A host of automakers and transportation infrastructure manufacturers are in Alpharetta to help develop their own technology that will enable communication between vehicles and traffic signals along with other smart traffic control equipment.

Enhancing public safety has been the biggest driver in adopting connected vehicle technology.

“Our mayor and council awarded [the contract for the traffic signal] software solely for our preemptive signal technology and that was public safety, specifically our fire apparatus vehicles, so they can get to locations quicker,” said Pete Sewczwicz, Alpharetta director of public works.

The technology uses dual mode chipsets installed in traffic control boxes. Emergency vehicles equipped with a cellular-linked onboard device can change a traffic light from red to green to allow the vehicle to pass through. It eliminates the need for and danger of navigating through a red light and an intersection filled with cars, pedestrians, and cyclists. Emergency vehicles will save an estimated 10-12 seconds per intersection by automatically getting green lights.

While the driving force was public safety, the technology provided more benefits. Drivers can download Applied Information’s Glance TravelSafely app to their smartphones and use it to connect to enabled traffic signals. It will provide an alert for upcoming red lights, countdown to a green light, and notify drivers if they’re speeding in restricted school zones or that an emergency vehicle is approaching. Pedestrians and cyclists with the app can also get alerts about approaching vehicles.

“It’s great for our bike routes,” Sewczwicz said. The technology can warn both drivers and cyclists using the app when they are approaching each other.

The deployment of this smart technology in North Fulton and other areas of Atlanta will provide ample opportunities for car makers and other companies to test their equipment in real-world situations, as opposed to using a test track.

“This is an actual full-scale deployment of connected vehicle technology over a 75 square-mile area,” Armstrong said. The CID contributed $308,000 to the project, which covers all intersections within its boundaries.