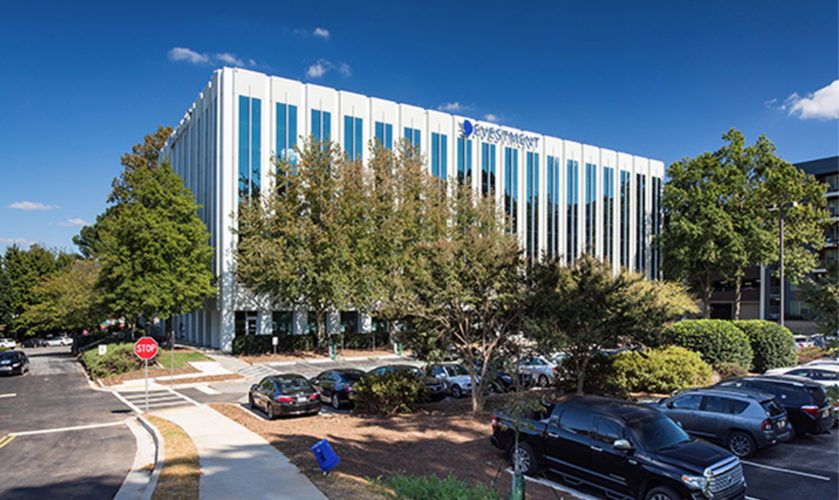 Investors were attracted to the synergy among Northside Hospital and Glenridge, and the opportunity to develop the existing pad site for a variety of potential uses.

“Glenridge Point provides a unique and valuable combination of an intimate ‘boutique’ environment, high-tech creative office buildout, walkability to amenities, accessibility, and visibility on a large site with the opportunity to add future density,” says O’Meara, executive vice president at CBRE. “Situated adjacent to the Southeast’s most strategic interchange at the intersection of Interstate 285 and Georgia 400, the property’s centralized location has fueled an unprecedented level of investment by the area’s key stakeholders, including significant infrastructure improvements.”

Given the location adjacent to “Pill Hill,” the Southeast’s largest concentration of medical services, investors were attracted to the synergy among Northside Hospital and Glenridge, and the opportunity to develop the existing pad site for a variety of potential uses.

Glenridge Point is positioned in Central Perimeter’s southwest quadrant among eight high-quality office buildings, totaling 1.5 million square feet The submarket is widely known for its popularity among large corporate tenants and medical facilities. Growth among these tenants has fueled almost three million square feet of positive absorption in the submarket in the last five years. During this time, rents in the submarket have risen 33% to almost $27 per square feet and vacancy has declined more than 870 basis points to 13.7%.

“Tenants and investors have placed a premium on well-located walkable environments as the submarket and its key economic drivers evolve,” O’Meara says.  “Tech-centric and medical users are a primary contributor to the continued rent growth across the metro area, but particularly in Atlanta’s infill submarkets, like select locations in Central Perimeter.  As the neighborhood continues to urbanize, core investors are taking a greater interest in the submarket.”