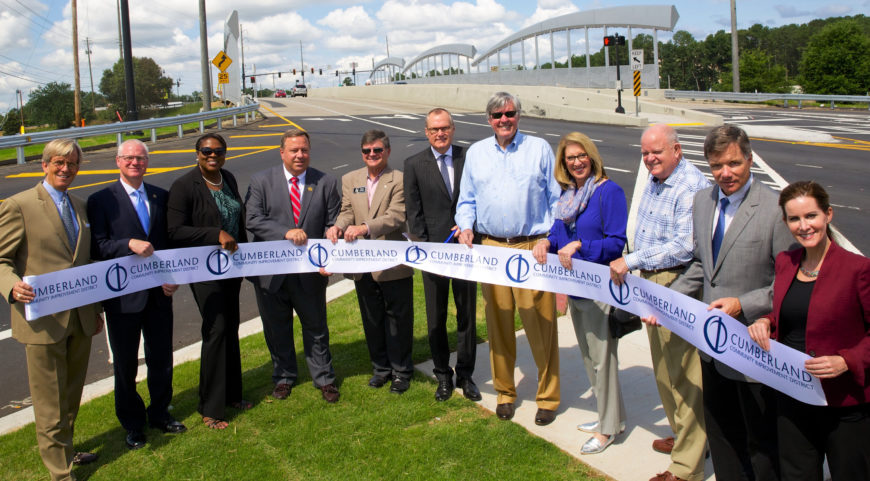 As cars whizzed by on Windy Hill Road behind them, officials with the Cumberland CID, the Georgia Department of Transportation and state and county government gathered on a grassy nook near Papasito’s Restaurant to celebrate.

The cause for their cheer was a major transportation project: a $46.4 million Windy Hill Road project from Cobb Parkway to Powers Ferry Road.

The bulk of that cost came from the Cobb Special Purpose Local Option Sales Tax, a one-penny sales tax.

Though some work such as landscaping and lighting remains unfinished, Tad Leitheid, the CID’s chairman, said the project, which includes road widening and new medians as well as a diverging diamond interchange over I-75, will make travelers safer.

The diverging diamond is the first such interchange in Cobb. That kind of interchange directs drivers into the opposing lane, eliminating the need for left turns.

Leithead said the corridor was built as a rural interchange 50 years ago and hasn’t received much improvement until very recently. He said the road in the past has experienced car accidents at a rate three times greater than statewide averages and injury rates double the average.

Leithead expects those numbers to go down as a result of the project.

The celebration came to a crescendo when those gathered cut a ribbon on a patch of grass near the diverging diamond as cars zipped by, sometimes honking at the gathering of well-dressed officials and photographers standing on the side of a busy road.

The man who held the oversized scissors was Georgia Lt. Gov Casey Cagle, who is running for governor next year.

“It’s always a great honor for me to be here in Cobb County, particularly looking at the skyline behind you and seeing SunTrust Park and the impact that is having on this community,” Cagle said.

In his speech, Cagle praised Cobb County for having the vision to complete the project in an area that is expected to see rapid growth. He said the diverging diamond interchange and future managed toll lanes will move traffic through the county quicker and more safely.

“None of those things are possible without great vision, and the individuals here in Cobb County continue to work a strategic plan,” Cagle said.

Leithead said that strategic plan has been in development since the CID got its start nearly 30 years ago.

“The project has been a joint venture of us, Cobb County and the Georgia Department of Transportation, and without those three significant partnerships, we would not be here today celebrating this ribbon-cutting,” Leithead said.

Cagle and Leithead also praised the partnership between the CID, state and county governments and GDOT.

Cagle said the project represents the type of thing other states should emulate. He also touted Cobb’s school systems, which he said have been integral in building up the area.

“I would also just say that the other thing that Cobb is doing a remarkable job with is not just looking at infrastructure and infrastructure improvement, but you’re also committed to a workforce that is second to none,” Cagle said. “And that in itself is how we continue to attract the kind of industry that you’re attracting here in Cobb County. We want to have an educational system that is appropriately aligned with industry needs, and when we do that, companies will continue to locate here … Cobb is exemplary in your effort and your steadfast commitment to make that happen.”