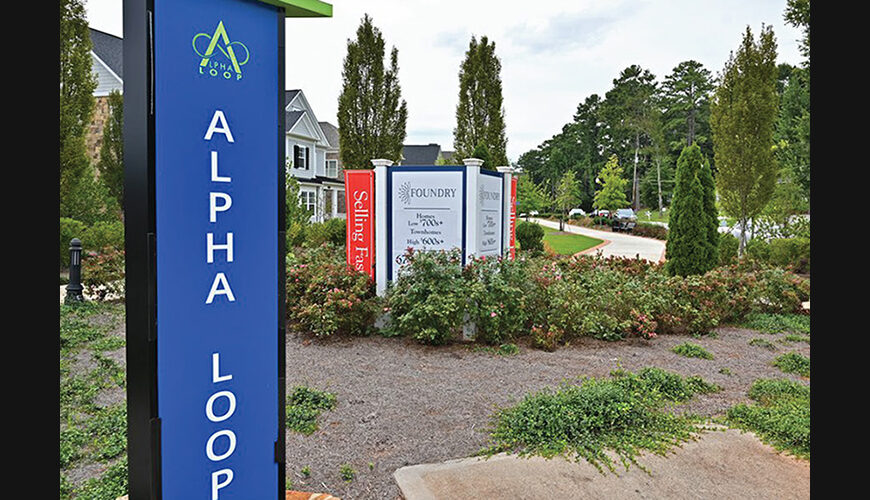 Alpharetta foresees the connection of three core destinations as the avenue to staying competitive with other cities for business and residential lifestyles post-pandemic.

The Alpha Loop linear park links together Alpharetta’s downtown district, Avalon and Northwinds, a 150-acre office park. The trail offers a 12- to 16-foot-wide paved path for walking, jogging and biking. It includes a 3-mile inner loop already under construction and a 5.25-mile outer loop still being designed. The inner loop has been the focus of most construction to date by both the city and developers, with office space and homes already existing along the loop.

How will it be built? Developers and the city will share costs on the project. Developers have helped pay some costs of the estimated $30 million project and in return Alpharetta has agreed to waive some development impact fees, Community Development Director Kathi Cook said.

The city has waived a total of $4.3 million in park and transportation impact fees, Cook said. 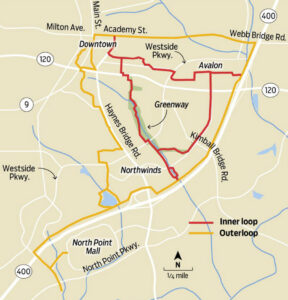 Two large developers are building a portion of the loop that runs through their developments.

Pope & Land, a developer of 24 acres inside Northwinds office park, is building more than one million square feet of office, hotel, retail and residential space. Project Director Frances Land said the firm is building about a half-mile of trail across the property. The path has been a major selling point for tenants, she added.

The Providence Group has three residential developments on Alpha Loop including the Maxwell, a mixed-use project under construction at South Main Street and Devore Road in Alpharetta. They will also contribute a portion of the trail through their property. 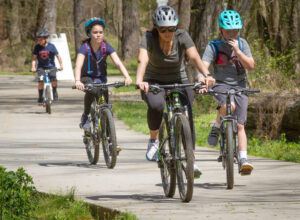 Other connections: As Alpha Loop has developed, Cook and other officials have seen the benefit of connecting the trail to Big Creek Greenway and the North Point Mall district where redevelopment is also planned.

“The connection of the Alpha Loop at North Point is important because we are trying to develop a North Point community where people will want to live,” Cook said.

Once Alpha Loop is complete, developers on the trail will have hotels, retail, residential and office space. Plans include elevated walkways and overlook spaces, pocket parks, a tunnel, lake and streams, along with a bike sharing system and public art.

How Alpha Loop began: Former Mayor David Belle Isle conceived of Alpha Loop while serving his six-year term, which ended in 2018. Alpha Loop was a way to keep up with Alpharetta’s growing population, he said, by connecting people to the city’s amenities.

Before the pandemic closed office buildings and businesses, current Mayor Jim Gilvin said corporate workers increase the city’s population of 60,000 residents to more than 120,000 on weekdays.

Belle Isle said he visualized Alpha Loop as a smaller version of the Atlanta Beltline, but Alpharetta’s treescape gives it less of an urban appearance.

Belle Isle is chairman of the Alpha Loop Foundation, which the former mayor said will work to raise money for sections of the project. 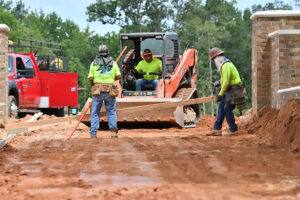 Alpharetta’s current fiscal year 2021 budget showed $9 million of the project unfunded, which includes part of the loop from Old Milton Parkway to Northwinds and from Westside Parkway to Northwinds. Cook was not aware of any additional funds budgeted for Alpha Loop at this time.

While developers have been willing to build sections of Alpha Loop, Cook said the city has paid for smaller portions, and also received funds through grants and other contributions.

Alpharetta paid for $330,000 for a small section behind Thompson Street downtown that helps to connect the district with Avalon, Sewczwicz said.

The city spent $620,000 on another section near Chelsea Walk Subdivision and Old Milton Parkway, he added.

Contributions and Grants: Cook said Alpharetta seeks grant opportunities and also hopes to receive private donations for the project through support from the Alpha Loop Foundation. The city has received a total $370,000 in grant funds, she said. The Atlanta Regional Commission provided a $120,000 grant to help fund a study that included connectivity to the North Point Mall area, and a stretch of the loop from Encore Parkway to Haynes Bridge Road, Cook added.

NFCID, separately, contributed to the extension of new road project started by the organization, the city of Alpharetta and the Georgia Department of Transportation, in which a connection to Alpha Loop was added, Winzeler said. The community improvement district designed the side street, Northwinds Parkway, located beside Gwinnett Technical College at Old Milton Parkway, Winzeler said. The road will become part of the Alpha Loop.

A contribution of another kind came from commercial real estate firm, Accesso. The business owns Encore Commons office buildings near North Point Mall and offered land easements to the city to assist with construction of sections of the loop, Cook said. 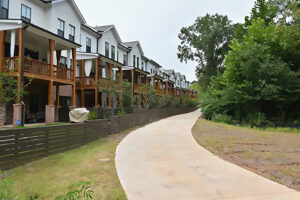