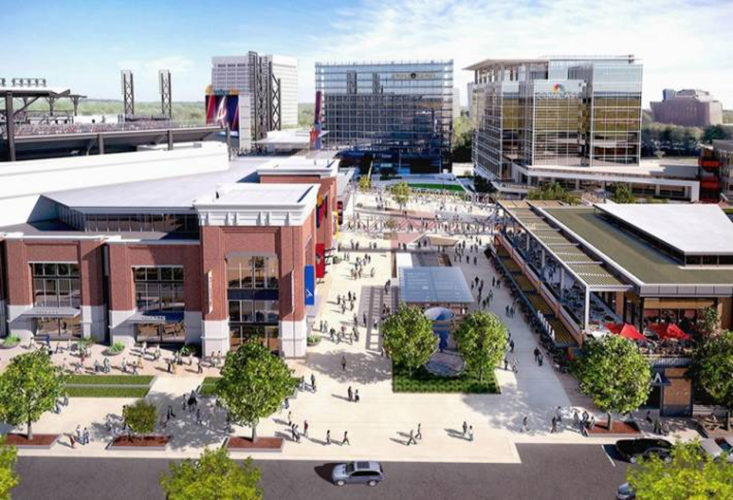 Braves’ SunTrust Park is finally giving the Cumberland/Galleria area something iconic. And that’s why Comcast is moving there.

“The idea that Cumberland, which as much as we love it, has missed a soul. It doesn’t have its Ponce City Market, or its White Provisions, or its Streets of Buckhead. Well, it does now,” says Pope & Land’s Mason Zimmerman, one of our panelists involved in the SunTrust Park development during our Future of Cumberland event this week at Galleria 400. Mason—who’s spearheading the office portion of SunTrust Park’s mixed-use center surrounding the Braves stadium—says it’s that sense of being part of an icon that attracted Comcast to anchor the office. “You’re now seeing the ripple effect of that.”

Mason was among an all-star lineup of those tied in with the new Braves project, including Atlanta Braves EVP Mike Plant, DLA Piper’s Brian Fielding (our moderator), Pollack Shores’ Michael Blair and Fuqua Development’s Jeff Fuqua. Mason was quick to point out that once the project’s completed, there will still be those who are critical of it. “I think the first two years, let’s be honest, the naysayers are going to come out, and they’re going to discount what we’ve said, and they’re going to look at it and tear it apart,” he says. “The first two years might be transitional. But so what? This is unbelievable.”

Michael says there’s a good chance that those most likely attracted to the project will be young professionals. While Michael says Pollack Shores has seen the age of renters at their properties in Atlanta get a little older (early to mid-30s), “I think here with the mix of uses, we still might be back at a younger demographic.” In fact, Michael says Pollack Shores is looking to divide the some 600 units into two properties—one with smaller units in a more urban feel for a younger customer.

Mike says that the Braves organization held to the idea that SunTrust Park was going to be a “four-star” venue since Cumberland had a “void” in that category, and chose operators who shared that vision, such as Live Nation, Omni Hotel and a host of unnamed retailers. “We’re in this thing for at least 30 years, and we want to make sure that we certainly deliver on our vision,” he says. “We know what we’re doing 81 days a year, but what are you going to do the other 274, which supports the office, the hotel, the retail? I think you’re going to see that vibrancy and a reason to be there 365 days of the year.”

Speaking of voids, Jeff says there was definitely a retailer absence in Cumberland between Cumberland and Town Center malls that had lots of retailers interested in the project. “We found out pretty quickly we could attract those retailers to this project,” Jeff says. Among the uses will be 18 restaurants, 150k SF of specialty retail, 100k SF of big-box tenants and a grocer. While no names were offered, Jeff says his firm is eyeing chef-driven, fast-casual restaurants, a relatively new trend in the industry.